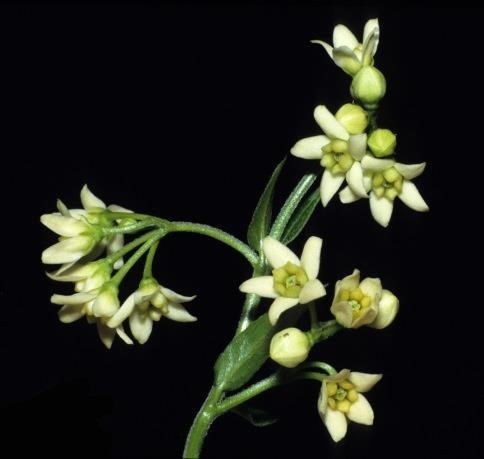 Flowering plant lineages in temperate areas often have undergone episodes of species radiations in the recent past, frequently associated with shifts in their niche (tropical to temperate) and in growth form (woody to herbaceous). However, little is known about the factors driving such radiations. In the tropical Asclepiadoideae of the dog bane family (Apocynaceae), only three lineages have undergone a substantial radiation in the temperate zones, of which Vincetoxium (s.l.) is the youngest one. To understand the evolutionary history of this recent temperate radiation, we study three complementary lines of evidence: morphometric, molecular, and chemical. Especially, we test a factor supposed to contribute to the evolution of this clade: a metabolism featuring phenanthroindolizidine-alkaloids (PIAs), a chemical defense strategy. We (1) develop a comprehensive morphological dataset allowing the delimitation of ‘morphospecies’; (2) provide a densely sampled phylogeny of the Vincetoxicum clade using targeted sequencing of nuclear genes, allowing the coalescent-based delimitation of species; (3) derive a stable species concept for Eurasian Vincetoxicum based on different lines of evidence; a tool urgently needed for future monitoring of biodiversity in Eurasia; and (4) by using quantity and diversity of PIAs as a proxy, we test whether the most successful species are the ones with the best chemical defense system.


Youtube-KanalKontakt aufnehmen
This site makes use of cookies More information
✖